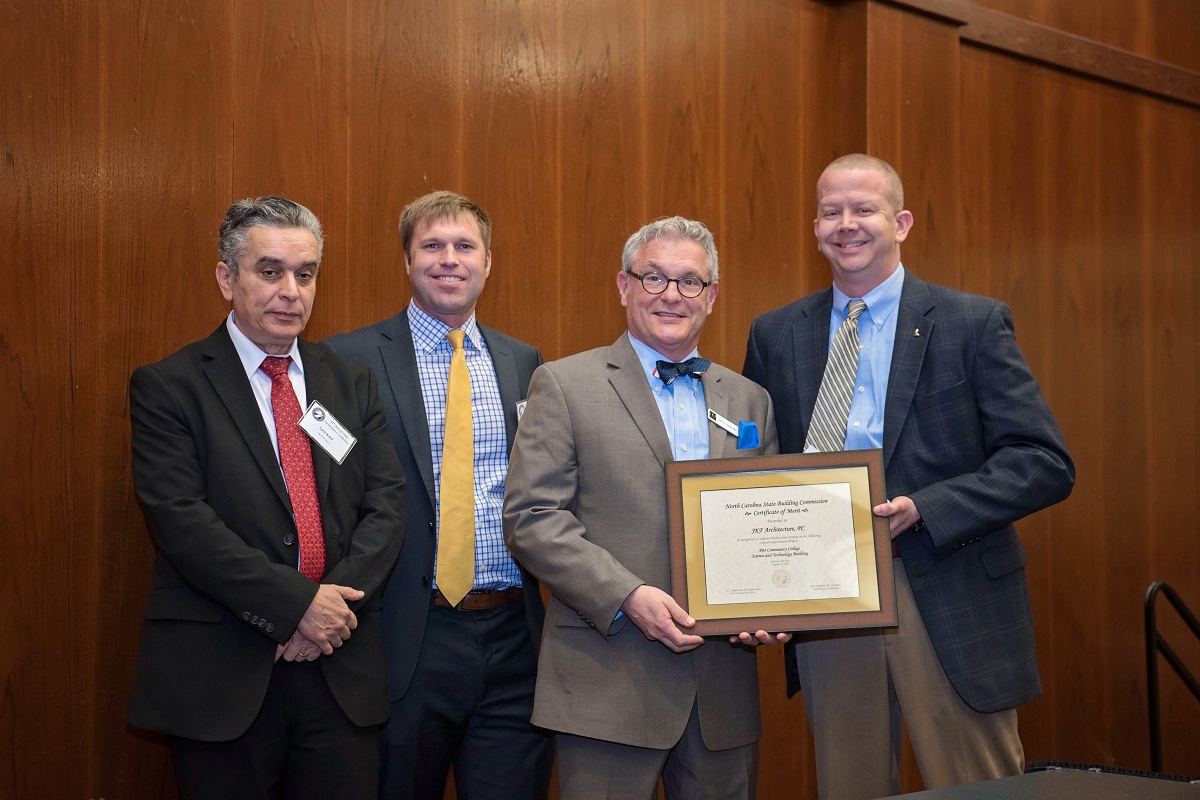 For the third time in its history, a project designed by Greenville-based JKF ARCHITECTURE has earned a Merit Award from the North Carolina State Building Commission. The award recognizes JKF Architecture’s efforts delivering the recently-opened Walter and Marie Williams Science Building at Pitt Community College (PCC). This is the second project on PCC’s campus to earn this distinction, after JKF ARCHITECTURE was awarded the recognition in 2012 for the successful completion of the Russell Academic Classroom Building. The State Building Commission established the Annual Merit Award Program in the spirit of recognizing those companies that demonstrate the competencies and efforts necessary to realize excellence in the design and construction of projects for the State of North Carolina. This year’s award recipients were recognized at the annual State Construction Conference on March 29th.

Completed in 2017, the 78,000 SF facility is now the largest of the 18 buildings on the PCC Main Campus. Along with the Biotechnology Center, the Science Building has nine classrooms, 16 laboratories, a STEM Learning Center, two flexible industrial spaces, science tutorial center, 24 faculty offices, and a 120-seat auditorium/lecture hall. The $17 million structure was funded through a $19.9 million county bond referendum approved in 2013 and a $2 million grant from the U.S. Economic Development Administration. Farmville-based Farrior & Sons, Inc. was the general contractor. The project bid $3 million under budget in August 2015 and the remaining taxpayer savings is being put toward the delivery of PCC’s Early College High School, also designed by JKF ARCHITECTURE and currently under construction.

In addition to the immense educational value, the Williams Building will support Pitt County’s industrial recruitment and advanced manufacturing efforts, offering flexible space that helps employers find a readily available, highly-skilled workforce. The JKF ARCHITECTURE Team is truly grateful to the Commission for the award and appreciates the opportunity PCC gave the firm to make the project a reality. Thanks are also in order to JKF’s engineering consultants on this project: PDC Engineers of Raleigh, Greenville-based Rivers & Associates, and NRW Structural Engineering out of Virginia Beach. JKF ARCHITECTURE appreciated PCC Vice President Rick Owens and Facilities Director Timothy Strickland making the trip to Raleigh to deliver the honor personally.